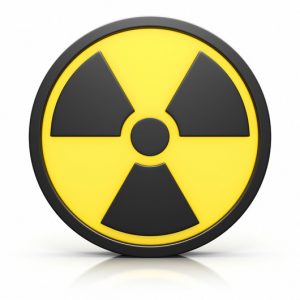 Use of radiation in the treatment of plantar fibromatosis or Ledderhose disease.

Radiation therapy is an option for treatment of plantar fibromatosis.

Radiation therapy, most often, is used as a treatment for cancer or malignant lesions. It may also be used to treat aggressive non-malignant lesions such as the nodules of Ledderhose Disease. Radiation may consist of x-ray but can consist of “proton beams” or other types of energy. High energy beams are focused and aimed at the tissue to be destroyed. Such treatment is non-specific in that radiation can destroy all tissues in its path but the idea is to use beams that are as “narrow” and focused as possible on the tissue to be treated.

Cell damage caused by radiation is caused by destruction of the genetic material in the nucleus of cells thereby preventing the cells from dividing and producing new and similar cells. Cancer cells multiply and spread in an aggressive fashion. Certain benign lesions such as those of plantar fibromatosis have rapidly dividing or multiplying fibroblasts. Radiation, unlike enzyme therapy, is non-selective in that all tissues in the path of the radiation beam are affected.

Radiation side effects may include short term and long term effects. Short term effects of radiation applied to a body peripheral body part may include skin irritation, hair loss, thickened skin with loss of elasticity, loss of oil (sebaceous glands) and sweat glands in skin and creation of wounds with poor healing properties. Long term side effects may develop later and can be harder to track due to the time period required to track such effects. Long term effects may include secondary cancers, tissue atrophy and skin prone to breakdown, peripheral neuropathy and wound formation. Such effects would be of concern on the sole of the foot which is under considerable mechanical stress in gait. The hands and feet are considered relatively radioresistant compared to other body parts, that is, able to withstand a higher level of radiation without notable damage. While direct radiation damage to tissues of the foot may not be significant one need consider the issue of total radiation exposure over time: https://www.scientificamerican.com/article/study-of-300-000-workers-w-many-years-of-exposure-to-low-doses-of-radiation-were-found-to-have-an-risk-of-dying-from-leukemia/

There are a number of reports of successful use of radiation treatment in Ledderhose disease and Dupuytren’s contracture. Most of the reports are short term in nature.

A recommendation for early use of radiation in palmar and plantar fibromatosis: http://www.ncbi.nlm.nih.gov/pubmed/20082184 The second study claims effectiveness in early stages but acknowledges the need for long term studies.