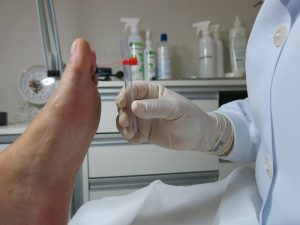 There are two traditional surgical approaches to the nodules of plantar fibromatosis.

The last excision or radical excision I performed was about 15 years ago. I had incorporated a dacron mesh into the fascia in an attempt to create a scaffolding for the fascia to repair itself. The results were only fair as there was lumpiness in the fascia, albeit better than before and the patient required use of prescription orthotics to aid gait.

Conventional surgical approaches to plantar fibromatosis (Ledderhose disease), in my opinion, are not viable options.

Newer “surgical options” for plantar fibromatosis. Surgical treatment is traumatic and may induce formation of scar tissue. That is even more so the case in a patient who tends to create excessive fibrosis or scar tissue which is the case with with Ledderhose disease. Procedures which are minimally invasive are less likely to induce fibrosis. Two minimally invasive surgical options are discussed: Topaz procedure and the TenexTX procedures.

1. Topaz Procedure. This procedure utilizes a radiofrequency wand produced by Arthrocare. The wand is small, like a pen and has a small tip that is inserted through small openings in the skin, pinhole like openings. A small tube with sterile saline drips through the wand to provide cooling. The procedure is also called “coblation therapy,” that is, cold ablation. It provides a relatively atraumatic means to “vaporize” abnormal tissue.

2. TenexTx Procedure. This is the brainchild of Dr. Jagi Gill, MD. He observed the means by which cataract surgery is perform, phacoemulsification. A small needle is inserted which uses ultrasound energy to dissolve the abnormal lens and vacuum out the diseased tissue before a new lens can be inserted. The Tenex wand is inserted into abnormal tissue using sonographic (ultrasound) guidance. Different tissue have different resonance or harmonics. The ultrasound frequency of the Tenex wand selectively liquefies the abnormal tissue and removes the tissue via suction. http://sanantoniopodiatrist.typepad.com/my-blog/2014/06/tenex-tx-procedure-a-new-minimally-invasive-option-for-treatment-of-heel-pain.html