Fibromas are growths of excessive fibrous or scar tissue. Fibroblasts are the cells that create scar tissue. When wounds or trauma occur, the body responds by sending white blood cells to the area as well as other factors that initiate the process of healing. That is often called the cellular phase of healing.

Once the cellular phase of healing starts to subside, the body activates fibroblasts to create scar tissue which is used to contract the wound, rupture or other trauma and place a scaffold over the injured area so that healing can occur. The scar tissue is eventually replaced by normal tissue. In order for normal tissue to take the place of scar tissue, the body need reduce the scar tissue. If scar tissue is excessive, then normal healing is delayed or prevented. Scar tissue is dense, inflexible tissue and, if excessive, can cause pressure, pain and loss of function. Because there is a defect in healing, attempts at surgical removal of fibromas are often unsuccessful as the trauma of surgery leads to more fibrosis.

Defects in our body’s ability to control the amount of scar tissue produced can be local or systemic. A fibroma is a growth of scar tissue. Fibromatosis refers to multiple fibromas. Plantar fibromatosis or Ledderhose Disease refers to fibromas forming on the soles of the feet. The scar tissue or fibrous tissue can grow so aggressively that such growths have been mistakenly suspected of being malignant in the past.

Here is an interesting article written in 2015 entitled, “Hyaluronan’s Role in Fibrosis: A Pathogenic Factor or a Passive Player? – https://www.hindawi.com/journals/bmri/2015/790203/

Hyaluronan is a high molecular weight polysaccharide found in the extracellular matrix that is, in other words, the “glue” that keeps our tissues together. It has traditionally been viewed as more of a passive substance around tissues but further study has shown it to be actively involved in tissue repair, tissue lubrication, movement of cells including fibroblasts. A correlation has been suggested between hyaluronan and regulation of fibroblast migration. Additionally, the paper above discusses the relationship between elevated levels of hyaluronan and inflammation as well as fibrosis.

Fibrosis is driven mainly by myofibroblasts and can turn into a “defective” myofibroblast that overproduces collagen (the protein component of the fibroma) and fibronectin. Fibronectin is a glycoprotein (protein with a sugar molecule attached) and is part of the extracellular matrix along with hyaluronan. Fibronectin is involved in cell growth, migration, adhesion. When fibronectin is “defective” then one particular consequence is excessive fibrosis. Remember, that Ledderhose is a disease of excessive fibrosis.

Collagenases are enzymes that target the abnormal and excess collagens that compose the fibroma. Hyaluronidase is an enzyme that specifically targets hyaluronan.

The more specific a treatment is for a pathologic process the more successful the treatment. While the exact mechanisms or biochemical triggers that lead to excess fibrosis are not fully understood, we have clear targets and specific treatments in the case of Ledderhose disease. With this knowledge in hand, it remains puzzling as to why surgical or untargeted treatments would be considered.

One mechanism by which the effect of hyaluronidase on the abnormal tissue found in Ledderhose or Dupuytren’s contracture can be understood.

The tissue used in the study was obtained via fasciotomy. It was found that there was an increase in glycosaminoglycans, “mainly dermatan sulfate” in the tissues.

Glycosaminoglycans are substances produced by cells and present in the extracellular matrix which are produced in excess in metabolic disorders because of enzyme deficiencies.

Additional references discussing the role of the extracellular matrix in the production of pathologic fibrosis:
https://www.sciencedirect.com/science/article/pii/S0945053X17304900
https://www.jci.org/articles/view/93557 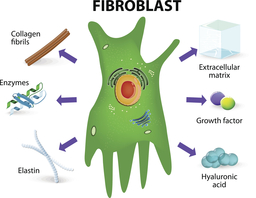